Amid a Tumultuous Industry, K-Pop Artists Seek Refuge in God

The entertainment business has always been a seedbed of culture and controversy. It’s filled with just about everything: glitz and glamour, grit and grime. Surprisingly, for a domain filled with all things worldly—wealth, fame, scandal—some people hold on to one thing that remains constant and reliable: their faith.

In the Korean entertainment industry, few remain steadfast in keeping a good balance between their careers and personal lives. There isn’t a lot of space to maintain one’s spiritual wellbeing in an industry notorious for unethical practices—and within a country that doesn’t place much emphasis on religion—but faith, for some, is essential for self-preservation.

The growing unpopularity of religion in South Korea

According to a report conducted by the Korea Statistical Information Service, 44% (less than half) of the population reported affiliations with a religion in 2016. Of this figure, 45% are Protestants, 35% are Buddhists, 18% are Catholic, and 2% are “others.”

Despite the efforts of Christian missionaries throughout the decade, the number of believers started to dwindle in the past few years. The religion’s growing unpopularity increased exponentially after Christian gatherings were linked to new waves of coronavirus infections.

Long before the pandemic, many young people in Korea have already stopped engaging in religious practices because of “authoritarian structures, skepticism, and anxiety” about other aspects of life.

A Korean citizen in the article shared that life’s more pragmatic concerns—such as career and employment problems—inhibit her from fully embracing a system of faith. “It’s good to come [to church] sometimes, but finding a job is my real occupation,” she said. “And going to church won’t help me with that.”

But this doesn’t mean religion doesn’t play a significant role in many young people’s lives. Even within the K-pop industry—one of the most beloved segments of mainstream pop culture—artists continue to talk about how their work is shaped by faith.

To these people, the topic of religiosity isn’t one of shame or non-secularity: it is, on the contrary, a source of pride. For a business where severe public scrutiny and abuse run rampant, there is no better way to view it.

God in the lives of modern entertainers

A conversation among three Korean-American artists provides a glimpse of how God plays a role in the lives of these celebrities—even within a domain that seems to have little room for it. On the podcast were rappers pH-1, Big Matthew (BM) from the group KARD, and Peniel from the group BTOB. 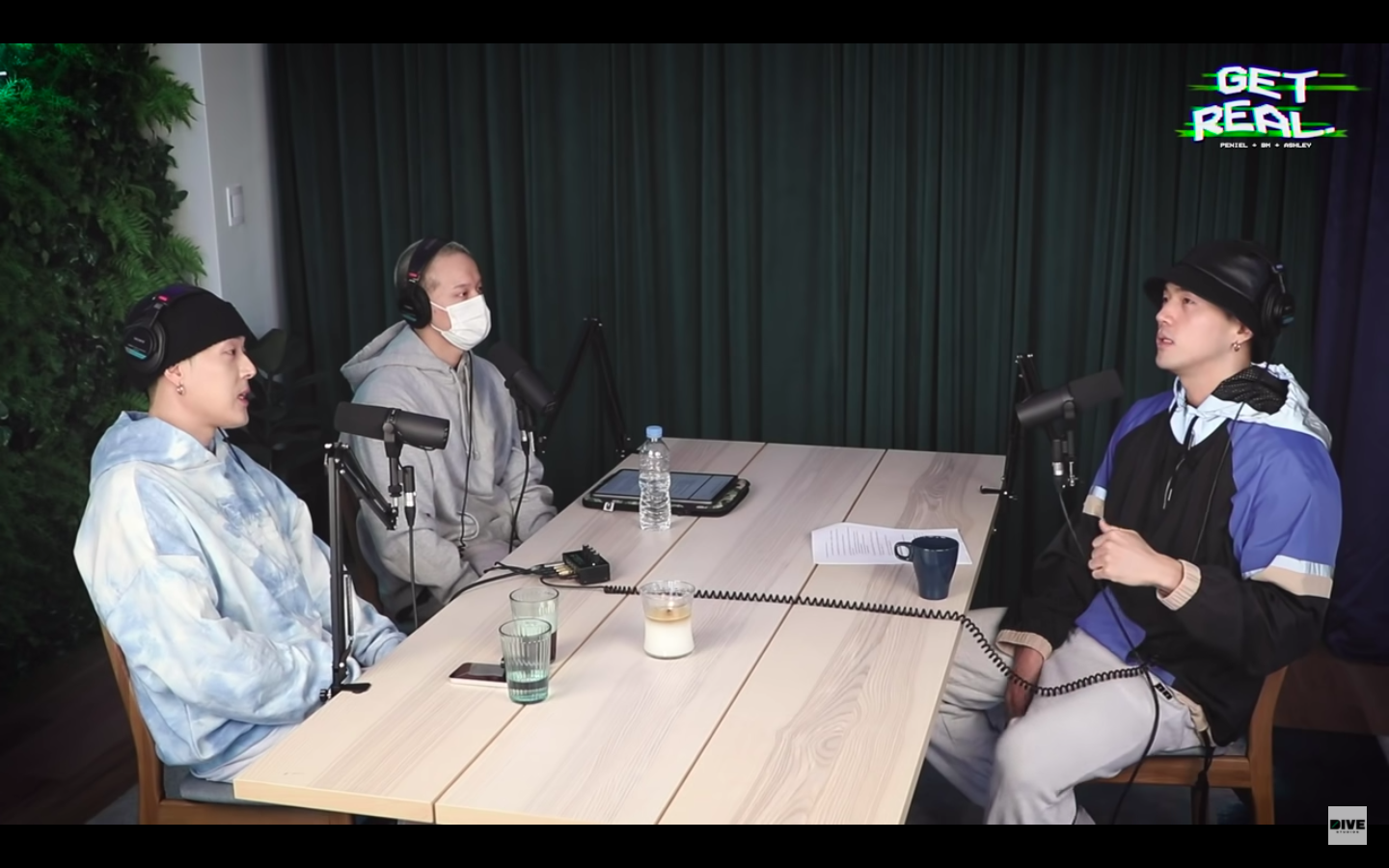 The three met through connections in the industry, but had some things in common: they lived in the United States, grew up in Christian households, and were active church members in their youth.

“Back in Long Island, my entire circle of friends were from church. I was very active back then,” pH-1 said, recalling life before stardom. But his participation in religious activities had undergone some changes when he moved to Korea. “It kind of made me steer away just a little bit,” he said. “I guess at this point in my life, I’m just trying to find my way back into that path. It’s definitely a journey right now.”

Still, constant prayer—and a personal promise—kept him going. “I swore to myself and made a promise to God,” he said. “I was like: ‘God, I’m gonna do it for You.’”

After having spent the majority of their lives in the US, the transition causes some culture shock. They preferred an English church service; it “connected with them more.” And one of the problems, they reported, was a lack of English-speaking churches in Korea.

“I didn’t know where to find [an] English-speaking church,” said Peniel. “I would go to Korean churches but I [couldn’t] understand anything.” Peniel feels like he was on the same boat with pH-1—still trying to return to the spiritual journey after that short period of disconnect.

But if they are unable to find a space to welcome their faith, they are more than happy to create them. “We started a small Bible study with a group of friends. I feel like that’s helped me, at least, try to get back for sure,” he reported. The study is attended by different people, some of them fellow K-pop artists.

Among the attendees is KARD member Big Matthew (or BM, his shortened stage name). Unlike the other two, BM’s relationship with God seems more mystical. He credits his K-pop artistry to the voice of God—via a remarkable, miraculous dream.

In this dream, he recounted, God asked him to read Daniel 2:19—something about wisdom and kings. Puzzled, he asked a friend from church to help him interpret what it meant. They came to a conclusion: “I think it means God is going to make you a king of something—that could be in K-pop or in any field that you’re doing,” his friend told him.

Three years later, just as he was “about to quit,” he got news that he was about to debut in a group called KARD. He was told that he would represent the letter K in the word: the King card. It all seemed to make sense from there, he said. “[What are] the chances? You were in your subconscious! It’s crazy to me,” he exclaimed.

This dream and verse keep him connected to God’s path, especially in times of turmoil. “Spiritually and religiously—this is something that doesn’t let me turn away,” said BM. “I always come back to it.”

The constantly jeering public eye can be quite the pressure cooker. Many K-pop artists have had to beg for “mental health breaks” just to be able to rest. And in the past three years, the world has seen at least three heartbreaking losses of K-pop artists to suicide.

“Theirs is a profession especially vulnerable to psychological distress,” said journalist and author Lee Hark-Joon. “They are scrutinized on social media around the clock, and fake news about their private lives is spread instantly.”

It takes fortitude to face such anxiety on the daily. Perhaps this goes beyond controversies, and even in the most mundane of activities—like performances and public appearances.

To fight against the fear, religious K-pop artists weaponize prayer as a ‘backstage ritual’ of sorts. pH-1 narrates his own in times of apprehension: “God, I’m not gonna do this for anything in the crowd. This is just for you. If you’re happy watching me, I don’t care if I mess up.”

There is no question about it: the K-pop business is a grueling one. But spirituality and purpose are factors in keeping afloat.

Kevin Lee, a backup dancer to mega-group BTS, wanted to challenge the view of the industry being “like a factory.” “They are living every day with a purpose and with a dream,” he argued. “And there’s freedom in that.”

Despite the deep-rooted cultural issues, the grace can still be as great as the pitfalls. But to achieve it requires a great deal of perseverance, resilience, and perhaps most important of all, sufficient support. And to many, God is a form of that support.

Faith makes the taxing journey worthwhile; God makes it bearable—and perhaps even worthy of celebration. pH-1 considers his career a miracle above all: “Just looking back at my own crazy life, I know He worked through me and He’s opened doors in such a way that I can’t deny His presence. I believe I’m a living testimony of His work.”

How to Curate a Spiritual Gallery Wall at Home

Walls can either be an empty, soulless space, or a blank canvas waiting to be filled with color. It’s a medium that offers the most room for expression. One way you can work with it is by turning it into […]

Most people know Buddhism as quite a peaceful and temperate religion — gory and violent scenes don’t seem to fit anywhere within this belief system. But it does not take the concept of sin lightly. These gardens are a testament to that.

“The core message is the strength found in beliefs and the willpower to see them through,” said artist Fernanda Maya. Her Joan of Arc portrait delivers “the power of a woman against dangerous situations, and the power to motivate others through your own actions.”

Say hi! Connect with Us

Get an exclusive 10% off and free shipping coupon for your first purchase. Receive amazing stories on spiritual artists, weed-smoking nuns, and other interesting content. Never miss out on limited-release art drops.

Enter your email address to sign in or register.

Use a social account for faster login or easy registration.