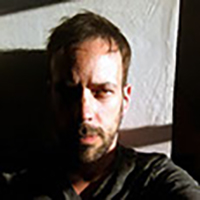 Digital and concept artist Christopher Balaskas calls himself a naturalist, but his wide range of cyberpunk-themed artworks may give people another perspective on his creativity. His story-driven pieces are filled with the mystique of distant lands and strange new worlds. These are often influenced by his favorite visual creators — such as Hayao Miyazaki and Juan Giménez — who, like him, also have a penchant for fantasy.

Follow here for updates for news and latest pieces from Christopher Balaskas.

Say hi! Connect with Us

Get an exclusive 10% off and free shipping coupon for your first purchase. Receive amazing stories on spiritual artists, weed-smoking nuns, and other interesting content. Never miss out on limited-release art drops.

Enter your email address to sign in or register.

Use a social account for faster login or easy registration.